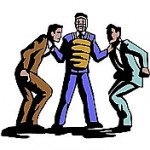 In project management, team conflicts define a form of disagreement between team members regarding some tasks, processes or individuals involved with the project. If not resolved properly, destructive conflicts lead to negative consequences and performance deterioration. Constructive conflicts, on the other hand, lead the team to growth and improvement in their performance.

In this article, we will present a definition of team conflicts, their importance, different types and examples in project management. Finally, we will give a description of the team conflict resolution process and list the ground rules of conflict management.

Read in this article:

This article will be helpful for project managers, team leaders and anyone who needs to know how to handle team conflicts in project environments and workplaces.

1. Definition: What is a Team Conflict?

Although conflicts are inevitable, project managers and HR professionals should strive to reduce the likelihood of conflict occurrence. They want to mitigate the negative impact of group conflicts and try to increase the positive impact of those disagreements.

We define team conflict as follows:

Team Conflict is an undesirable, interpersonal problem that occurs between two or more members of the same project team, and affects results of teamwork, so the team does not perform at an optimum level.

Project team conflicts are caused by the situation when the balance between perceptions, goals, or/and values of the team members is upset. Therefore, these people can no longer work together effectively and no shared goals can be achieved in this team environment.

When conflicts originate in any of these factors, they can lead to damaging consequences for teams and project performance.

2. What is the Importance of Conflict Management in Teams?

Although conflicts can be seen as negative factors, they can also help teams to reach better results. This statement is true if we manage them correctly.

In other words, team conflicts will be more common when the project task complexity increases. Therefore, team members will have to work more closely together and there may be more argumentation going on between them.

In spite of these facts, team conflicts should not be ignored or neglected.

In this context, let’s classify disagreements between team members.

First of all, conflicts between team members can be functional and dysfunctional.

The listed types of team conflict are defined considering the functional attribute of project teams.

Another way to classify employee conflicts refers to focusing on the origin of conflicts, or investigating how a conflict has evolved. Following this idea, the next sources of group conflicts are to be considered:

These team conflict types let team leaders use their conflict resolution skills (like Intervention and Feedback) to look at the original reasons of a group conflict.

Besides this way of investigating team conflicts, there is another way to classify conflicts into the following types:

By understanding all the listed conflict types as well as the given definition, team leaders can achieve better conflict management because they will be able to investigate the nature of team conflicts and generate the right resolution.

The following examples help to understand the previous classification of team conflicts in project management environments.

Constructive conflicts can take place in all team types, yet it is more likely to appear in non-virtual teams.

Let’s look at this example:

A project team consisting of three members was working together for a year. These were a programmer, a product designer and a project manager. At this time, program code was developed, product design documentation was prepared, and the project plan was finished. The tasks of this team were well-coordinated, so no conflicts occurred in their work for the previous several months.

The client wanted to have the final product earlier than it could be delivered by this team, so he introduced changes into the schedule and delivery date so that they could perform faster. As a result, the project schedule broke down and the product would be delayed because all three members performed in different ways to develop it in less time period given by client.

At this time, the project manager had to intervene with team members in order to find a common solution for delivering product on the specified deadline. The video-conferencing system was used for this purpose. Through conversation, the project team ultimately found a solution for their problem.

Thus, conflicts between team members in this case were constructive because they led to a successful resolution of their problem and ultimately helped them deliver product on time.

A destructive team conflict can occur in any team type. Below is an example.

A project team consisted of two employees, an architect and an engineer. Sometimes, the colleagues work hard to satisfy their superior manager’s demands, but do not remember about their own task.

They are worried about working overtime for their superior, but they never think how they can manage their tasks without extra time. This is one of the most common destructive functional conflicts among teammates in IT project management.

Here is another example:

A company was developing a new product with a deadline of one year. The project team consisted of a project manager, a designer and a programmer. In this team, the project manager was dissatisfied with the work of programmer because he did not have enough time to perform his tasks. The programmer thought that all the fault lies on design group whose product was not ready for software development.

The result of this conflict was that product was developed too late so the client could not use it as expected.

There are a few conflict management strategies for resolving disagreements and disputes between teammates within a project team.

Different experts have different advice on this topic, but they all agree that the most effective way to resolve conflicts is through collaboration between conflicting parties.

What is a Conflict Resolution Process?

As mentioned, conflicts arise when team members’ opinions on some issue differ from each other. The conflict resolution process is a problem solving method to fix such a conflict and find a solution. This process defines a series of stages to investigate the reasons of a dispute, collaborate between the conflicting parties, agree on an acceptable solution, and implement this solution.

Usually, it is a team leader’s responsibility to set up a conflict resolution process for their team in order to address group conflicts in the workplace.

In project management, the conflict resolution process can be divided into two categories: intervention and feedback. The project manager is in charged of managing this process (acting as a conflict manager).

Through this approach, the team leader needs to intervene with the conflicting parties in order to find their common solution. Such an approach is more applicable to large teams with 10+ members.

The team leader needs to perform the following steps:

Conflict resolution with this approach is based on feedback. Each team member who participated in the team conflict needs to give responses to each other’s statements or actions during the conflict.

The goal of the Feedback approach is to maintain good relationships between teammates, because team members can work well together if they have positive relationships with one another (even though they may be in conflict).

The project leader can use the following methods to provide feedback to the conflicting parties:

Project leaders can use conflict resolution process based on feedback or intervention according to the situation they face. They may also use both approaches together in order to deal with team conflicts.

— 6.2. What are some precautions for preventing conflicts?

Having clear expectations of team members is probably the most important thing to prevent team conflicts. Develop a common ground understanding about each other’s role and tasks, and follow a simple structure of decision making process will help team members to reduce unnecessary conflicts by improving their communication skills.

— 6.3. What is the definitions of an effective conflict resolution strategy?

— 6.4. How to safely handle the fear of conflict team dysfunction?

To handle the fear of conflict team dysfunction, it is indispensable for team members to take responsibility for their own actions, propose other solutions to the conflict and cooperate with the team leader and other team members.

— 6.5. What are the implications of conflict on teamwork?

Conflict can have a negative, positive or neutral effect on teamwork. It is always important for teammates to attack problems rather than each other. By being constructive rather than destructive, team members will be able to keep their focus on the project goals instead of squandering time and energy on conflicts with others.

— 6.6. What are some problems contributing to project conflict management?

A project team leader’s inability to handle grievances effectively is one of the most significant reasons of ineffective conflict management in projects. He/she should have confidence in himself/herself and be able to set up clear work instructions, so that employees will follow them without any question, which will eliminate unnecessary conflicts with their coworkers.

Successful resolution of any problem depends on team leaders’ ability to identify the nature of conflicts, investigate all common causes and therefore determine the best resolution methods for them.

In order to do it correctly and safely, the team leader should always use some mechanisms for gathering more information from all sides. These include video conferencing systems, team-building activities, surveys and other techniques described above in this article.

In conclusion, it is important that a project manager teaches employees to avoid conflicts with their coworkers by using some simple skills for conflict management and design their own unique strategy of resolving team conflicts more effectively.

Mary is a technical writer at a product company developing project management software tools, and her job is to ensure that the instructions and materials are clear, concise, and easy to follow.