VPNs for Distributed Teams: What Project Managers Should Know

It’s no secret that virtual private networks (VPNs) have made their way into many industries, from banking to gaming. But the most important takeaway for project managers might be the following: VPN software provides a secure way for distributed teams to work together.

That may sound like a given, but it turns out that VPN software offers an array of benefits that even experienced project management professionals might not know about or expect. This blog will cover the essential information a project manager needs to know about VPN apps.

The Benefits of VPN Apps for Distributed Teams

When it comes to understanding VPNs and their impact on remote project management, the first thing to understand is why VPN software is a good idea for any company that works with remote teams and contractors.

A VPN app like Surfshark offers security that is similar to that of email encryption; however, instead of replacing existing methods of communication, it creates a “tunnel” through which information can pass safely (when browsing, for example).

Think about it: if someone were to hack into your company’s main email system, it wouldn’t be hard to access all the information there. But with a VPN, those emails would still be encrypted, so even if the hacker managed to crack the encryption used in the transmission of email messages, there’d still be no way to access that data.

Even when your team isn’t physically separated, you might not always be in the same location. For example, imagine that you are traveling for work to a foreign country and you need to connect with your teammates back at the office.

A VPN app can allow you to bypass internet restrictions that would otherwise prevent you from reaching your colleagues. This is especially helpful for team members who work in countries with heavy internet censorship — or even just those who want to view streaming video and websites from a region that blocks those resources.

Server consolidation refers to the idea of putting multiple servers into one physical space. And if you plan to host your VPN primarily online, it’s a great way to save money on infrastructure costs.

For distributed teams, this is especially helpful because it means you can host all of your team’s files on one virtual server. Putting all of your project data on one secured server lets everyone keep their information in the same place and makes it easier to remember where files and project management resources are stored.

Ever heard of the term “shadow IT”? Shadow IT refers to the fact that teams and departments often create their own cloud-hosted apps, storage solutions, and communication tools. This often happens when an employee doesn’t want to wait for IT to get around to approving their request for a new app or program that they need.

Further, it can happen when the employee is working on a project that seems important but isn’t officially part of their job description.

What this means is that team members can create and access their own cloud-hosted packages. That’s great for projects that require unique apps, but less useful for other bigger projects that might not need new tools. With a VPN app, you can create a virtual server that connects to any software resources your team needs. 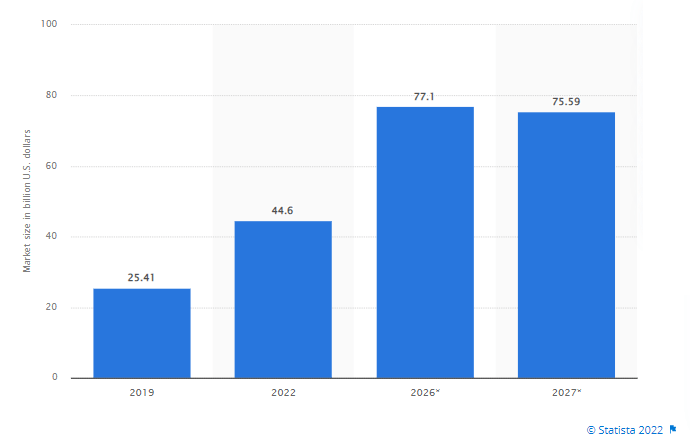 Size of the virtual private network (VPN) market worldwide from 2019 to 2027 (source: Statista.com)

Now that you understand the benefits of VPNs, it’s time to consider several different options when looking for VPN apps. To help you select VPN software that’s right for your needs, here are the 5 most popular and effective VPN apps out there.

OpenVPN is a very broad-based open source protocol. It’s one of the most popular choices for VPN connections, and it’s considered a solid VPN option for distributed project teams.

Surfshark is an excellent option for distributed teams who need to work with multiple VPN connections and people who don’t have a lot of experience with VPN software.

ProtonVPN is a fast, easy-to-use VPN app that works with any device. With ProtonVPN, you won’t have to worry about slow speeds or compatibility issues.

WindScribe is a notable option for distributed teams that need to work with offshore contractors and freelancers. WindScribe offers a solution to a major security problem that many distributed teams face. That’s because so many of the VPNs on the market today make use of third-party servers. This is a big security risk, and it can expose your sensitive data to foreign surveillance networks.

Virtual private networks are powerful business tools that project managers can use to improve distributed team communications and safety.

A VPN app can be a great addition to just about any project team, so don’t hesitate to consider them when you need to increase the safety of your remote group’s cloud-based resources.